Pipeline encroachment: What can the oil and gas industry do to mitigate the crisis?

Encroachment crisis is a major issue faced by the energy industry today. Despite several regulations and comprehensive plans regarding new construction and development near pipelines, there are enough and more Right of Way encroachments in the US today. In recent years, major pipeline encroachment incidents resulting in gas leaks, loss of life, serious injury or major property damage have caused the industry and regulatory agencies to ramp-up efforts to identify encroachment issues and develop measures to prevent them.

Across the globe and especially in the United States, pipelines are regulated to ensure the safe and efficient transport of crude oil, refined products and natural gas through populated areas.

The United States alone has over 2.6 million miles of oil and gas pipelines. Of the many pipeline accident causes that occur to oil and gas pipelines, approximately 80% of all the accidents are caused by impacts (mechanical damage) to the pipeline from a digging or excavation activity. The largest source of failure for a pipeline is damage from outside forces. Even an accidental scratch made by a farmer digging near a pipeline can, in time, turn into a dangerous and costly rupture.

The pipeline operators must, at all times, monitor the density of the population in close proximity to their pipelines and adjust their margin of safety as needed. These companies often use ground patrols, either by ATV or by foot, or fly planes over pipeline rights-of-way using pilots trained to visually detect a release. But these processes are tedious, labor-intensive, incredibly expensive not to mention potentially dangerous. 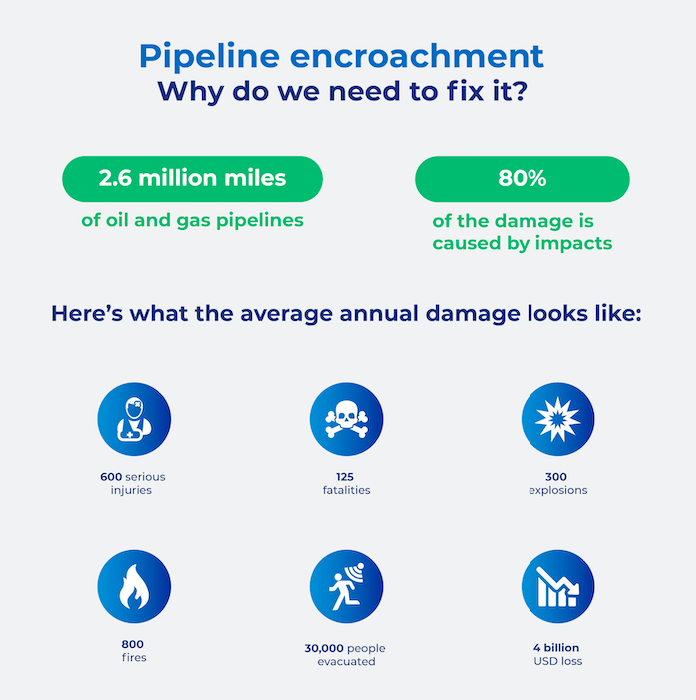 According to the FracTracker report, on an average, a pipeline catches fire every 4 days and results in an explosion every 11 days, an injury every 5 days and a fatality every 26 days. They concluded that hazardous liquids pipelines cause the majority of incidents (64%) and damages (also 64%) even though the liquids account for less than 8% of the total mileage of the network.

In total, there have been almost 600 serious injuries, more than 125 fatalities, 300 explosions, more than 800 fires, 30,000 people who had to be evacuated and a staggering 4 billion USD worth of losses due to the damages. These tragedies often ruin the company’s reputation. Hence the industry just needs to fix the problem before it’s too late.

Data shows that pipelines and people pose life-threatening risks to one another. A major natural gas transmission pipeline has the potential to rupture and explode, harming people and property; a major hazardous liquid pipeline has the potential to spill its contents into a river, contaminate drinking water, or release hazardous vapors, causing public health and environmental problems; a gas distribution line has a potential to leak and ignite causing an explosion in a city. At the same time, a landowner or city may improperly plant deep-rooted trees too near a pipeline, introducing a potential damage source to that line.

According to a 2018 analysis, methane leaks from the US oil and gas industry are 60% greater than official estimates. The leakage rate was noted to be 2.3% compared to the 1.4% estimate from the EPA. Experts believe that a 2.3% leakage rate is concerning.

Methane warms the planet 80 times as much as CO2 over the first 20 years after it is released. Scientists estimate that the methane in the atmosphere contributes to about 25% of global warming. Faulty equipment is being deemed as one of the major reasons for more methane leaks too. According to a study published by the Yale school, in the United States, fugitive emissions from the oil and gas industry total an estimated 13 million metric tons per year, amounting to $2 billion in lost revenue; globally, the value of leaking gas is $30 billion.

The oil and gas industry is faced with a unique challenge to detect methane gas leaks that have become a sore thumb for them. Up to now, estimates of greenhouse gas emissions from industries have relied mainly on paper-based calculations, based on the amount of energy consumed by people and businesses.

But as technology improves, researchers are starting to put satellites to use – and the potential of Synthetic Aperture Radar (SAR) is proving to be instrumental in detecting gas leaks. Let’s understand.

The solution to all these challenges of pipelines buried beneath the earth’s surface can be found in outer space. Traditional methods are indeed outdated, expensive and are extremely prone to operator error. Hence, intelligent remote sensing using satellite imagery can be an effective solution to find these encroachments as it is much more accurate and minimizes human effort. Thus greatly reducing the risk of fatalities and saving the company’s image from getting tarnished.

It is now possible to remotely monitor thousands of miles of pipelines for hydrocarbon and methane leaks with the help of SAR technology, combined with AI-driven data processing techniques. Satellites can also help in clearly seeing new constructions, farms, equipment and other structures encroaching on the Right of Way. Moreover, monitoring vegetation along the pipelines including identifying the health and growth of different species is also possible via satellites today. 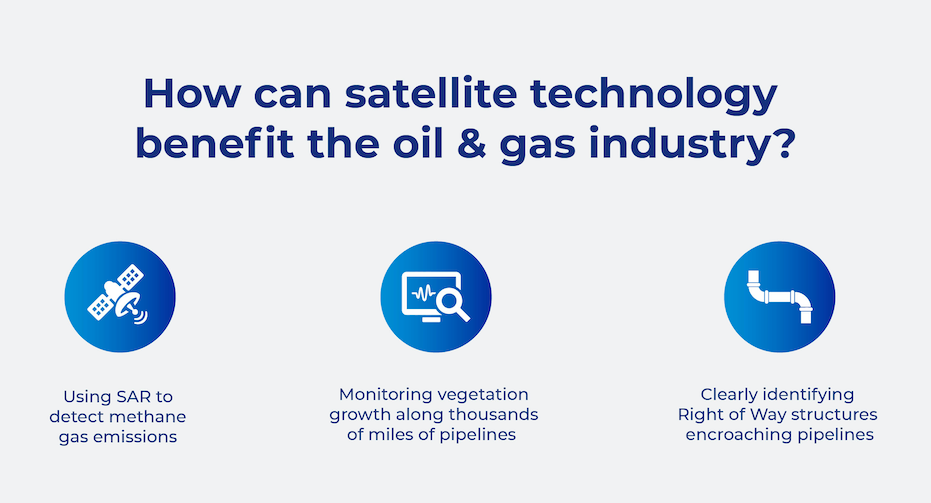 Apart from preventing RoW, vegetation management and detecting methane gas leaks, satellite tech can also be used to develop and deliver a reliable and economical means of monitoring pipeline assets over a long period of time, predictively and in advance. Most pipeline operators are not equipped to conduct this kind of monitoring independently and need an external remote sensing company to address this need. Pipeline operators need more than the regular checks; they need a constant pipeline monitoring system that analyzes the satellite imagery and then alerts them of any unusual activities or changes around their pipes. With GIS-enabled services and high-resolution imagery and frequent revisits, this is possible.

Besides the potentially far-reaching effects on the environment, wildlife and local communities, a contaminant release costs time and money and can negatively impact a company’s reputation. Risk management is the best method for the pipeline industry to address public and environmental safety. Greater efficiencies and better cost control is a priority for any pipeline industry company. All of these and more is possible using satellite signals and artificial intelligence.

Our revolutionary satellite-powered Remote Monitoring and Survey System (RMSS) is helping oil and gas industries in identifying and detecting RoW and vegetation encroachments as well as methane gas leaks. For a demo request, please write to us at info@aidash.com.