A technical deep-dive into Satellite Imaging, Multispectral, SAR and GAN

In the recent past, discussions around the use of satellite imagery as an emerging technology for remote monitoring of infrastructure and vegetation have picked up pace. From tracking vegetation coverage and change detection to disaster monitoring, satellite imagery has indeed proved to be a revolutionary technological advancement with several use cases up its sleeve. While it may seem easy, the science behind capturing and analyzing satellite imagery is complicated, yet very intriguing. Let’s understand how satellite imagery works and helps solve some of the world’s most complex problems.

Understanding satellite imaging: How it works

Satellites have been used for capturing geospatial information for over 60 years now. Satellite data is used for an ever-expanding collection of uses, such as weather forecasting, mapping, environmental research, military intelligence and more. Let’s understand the technicalities of how satellite imagery is collected, analyzed and processed:

Why is Synthetic Aperture Radar a valuable tool?

In the past decade, Synthetic Aperture Radar (SAR) has turned out to be one of the most useful and emerging technologies in remote sensing. The USP of this technology is how it can synthetically produce higher resolution images in any weather condition, including nights.

SAR can “see” through darkness, clouds and rain, detecting changes in levels of water and moisture, habitat effects of natural or human disturbance and changes in the Earth’s surface after natural disasters like earthquakes and sinkhole openings.

According to a research article by NASA’s Earthdata, the spatial resolution of radar data is directly related to the ratio of the sensor wavelength to the length of the sensor’s antenna. For a given wavelength, the longer the antenna, the higher the spatial resolution. From a satellite in space, we’d need a really long antenna, something that’s not practical for a satellite sensor in space. Hence, scientists and engineers came up with the synthetic aperture. In this concept, a sequence of acquisitions from a shorter antenna are combined to simulate a much larger antenna, thus providing higher resolution data. 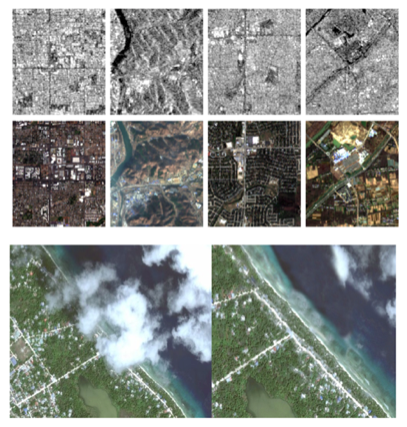 The processing of SAR data is what is the most complex part. Depending on the type of analysis needed to be performed, these steps can include: applying the orbit file, radiometric calibration, de-bursting, multilooking, speckle filtering and terrain correction. Thanks to advancements in Artificial Intelligence and Machine Learning algorithms, it is now possible to make use of SAR data impeccably. One such network is the Generative Adversarial Network (GAN) that is making SAR data processing and analysis easier.

The Generative Adversarial Network (GAN) is an artificial neural network based on unsupervised learning methods. Thanks to its powerful model representation capabilities, GAN has been introduced to synthesize synthetic aperture radar (SAR) image data.