Climate change causing more disasters than ever: Are utilities prepared? 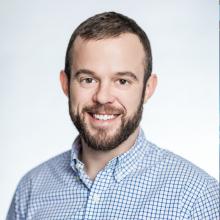 Sweltering heat waves, massive cyclones, hurricanes, floods, wildfires and other such natural disasters have become more intense in the recent past. Despite the continuing debate, several scientific studies claim that climate change is one of the major reasons behind this phenomenon. Among the many hard-hitting impacts, it is pertinent to note that such disasters have underscored the vulnerability of our electricity system infrastructure and raised questions on the way utilities conduct their operations and maintenance - including vegetation management, grid resilience, power restoration and more.

Statistics speak: Intensity of natural disasters to worsen every year

Data shows that at least 207 natural disasters were recorded globally in the first six months of 2020 — this is above the 21st-century average (2000-2019) of 185 disasters. Climate change is likely to make tropical cyclones more intense, the Intergovernmental Panel on Climate Change (IPCC) has warned. In the US alone, the National Weather Service has predicted that there will be a total of 25 named cyclones this year, of which 7-11 will become hurricanes, including 3-6 major hurricanes.

Talking of tropical storms and cyclones, it is pertinent to discuss the impact of Isaias that ravaged the New York Tri-State Area this month. Tropical storm Isaias knocked out power for more than 2 million customers across New York, New Jersey and Connecticut. According to the Verge, Isaias brought the strongest winds New York City has seen since Sandy; 70 mile per hour gusts slammed across the city, ripped down power lines and hurled tree branches and debris at other lines. The storm was soon followed by the second-largest outage in energy company Con Edison’s almost 200-year history, which left over 250,000 of its customers without power.

In December 2019, a report was published by Columbia and Con Edison on how to address the grid’s vulnerabilities. The five biggest “climate-driven risks” for Con Ed’s systems are hurricane-strength winds, coastal storm surges and flooding from intense rainfall, sea-level rise and extreme heat. 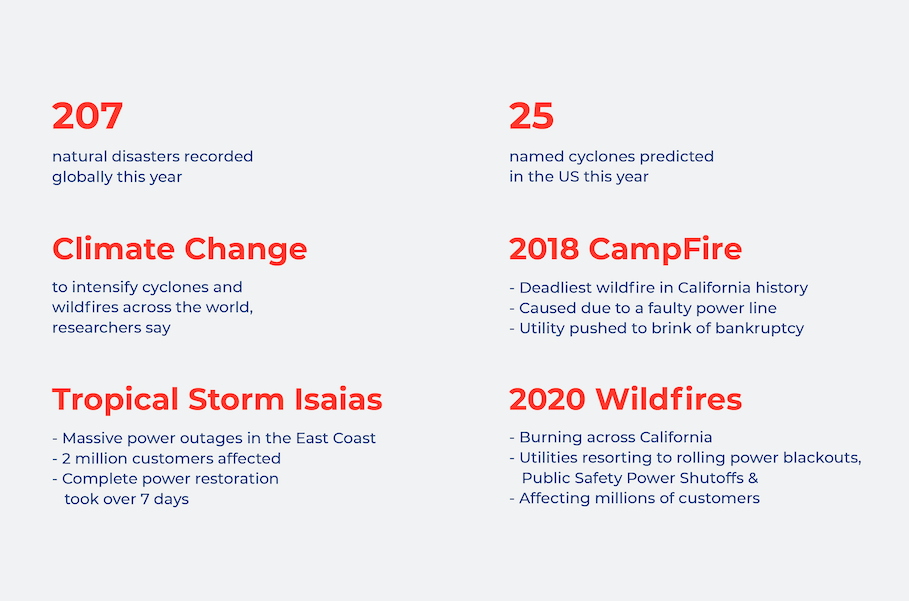 After cyclones, comes the burning topic of wildfires that have caused immense destruction in California again this year. Research from Stanford University predicts that this and each subsequent fire season will be drier, hotter, windier and cause more incidents in the coming years. What does it mean for utilities? It does mean that fire management for utilities – particularly in high-risk areas such as California – is going to become a high-risk responsibility. As utility infrastructure gets damaged in the wildfire zones, power outages will become the norm and restoration will become increasingly difficult. Under such circumstances, not only will utilities need to rethink their existing vegetation management strategies, but risk mitigation strategies for managing the impacts of climate change will have to become a fundamental part of each utility’s long term plans.

Utilities are answerable to the authorities and the public for their response before and after such natural disasters. In 2018, one of the deadliest fires in California - Camp Fire - was caused due to faulty power lines, as a result of which one of the largest utility companies in the US was pushed to the brink of bankruptcy.

How can utilities prepare for disasters and disruptions?

Utilities cannot fight or stop the occurrence of natural disasters, but they can and must be prepared to predict, plan and mitigate the risks of such disasters and disruptions. At a time like this, they’re being questioned by authorities and customers for their planning and strategies regarding their preparedness.

As of 2020, technology has made significant progress to answer some of these questions, thanks to predictive analytics, Artificial Intelligence and Satellite technology. It has become possible to easily access data and information with the help of cutting edge technology. Let’s find out how: 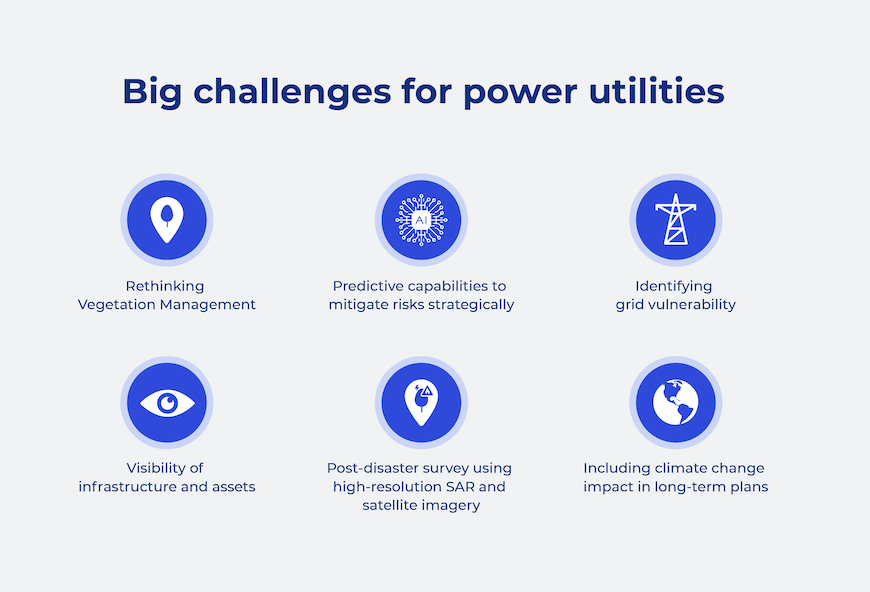 Adopting new technology that helps in fulfilling business needs is a must in today’s times. In the same way that satellites help us gain knowledge about weather conditions, these eyes in the sky can help utilities prepare for the worst of disasters. When there is accountability for millions of customers and a huge amount of money is spent on reactive maintenance, technology can empower utilities to be proactive and prepared.

AiDash is a leading AI-first SaaS company enabling satellite-powered operations & maintenance for power utilities and other core industries in the US. To know more about our disaster and disruptions management model, drop us a mail at info@aidash.com.